About the Fort Wayne Spacemen

The Fort Wayne Spacemen are set up as a step along the path for young men to continue their hockey careers.  Our focus on player development, both on and off the ice, aims to prepare our players to achieve their goals of playing at the next level of Juniors and Collegiate hockey. 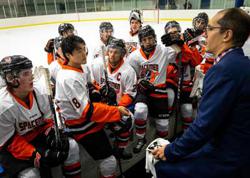 The Fort Wayne Spacemen are a Tier III Junior A hockey team in the Premier Division of the United States Premier Hockey League (USPHL), in the Mid West East Division playing at the SportONE Parkview Icehouse, Fort Wayne, Indiana.

We play a 44 game league schedule, plus several USPHL showcase tournaments during the season.

The Spacemen's home rink is the SportONE Parkview Icehouse, a state-of-the art multi-purpose ice rink facility, built in early 2010. Our facility is the only three sheet facility in Indiana, and one of the largest in the region.

Our USPHL NCDC affiliate is the Rockets Hockey Club, in Bridgewater, NJ.

Our players range in age from 16-20, and come from across the United States, Canada and Europe.

The Fort Wayne Spacemen are proud of their local ownership. The team boasts three Fort Wayne, Indiana residents -- Todd Ramsey, John Finch, and Todd Hensley. There’s also Chicago-based John Schwarz, who is part of the ownership of five franchises in the USPHL.

The Fort Wayne group saw a need for a Junior A program in the city. “It's what's missing in Fort Wayne hockey,” said Finch, who is part of the ownership group and will serve as president and general manager of the Spacemen. “We have a terrific youth program, a terrific high-school program and then it jumps to college. Players need to get Junior A experience in between high school and college."

“We think Fort Wayne is a hockey hotbed and there are plenty of fans who will support the team, welcome these young players into our community, and we hope to become a real asset.”

"Plus," continues Finch "the difference here, is local ownership that understands the market in Fort Wayne and junior hockey."

Founded in 2012, the United States Premier Hockey League (USPHL) is comprised of 170 teams in a variety of divisions from Junior to the all-youth Eastern Hockey Federation. Our teams are geographically diverse, ranging from North to South to the Midwest.

Our Junior Divisions consists of the National Collegiate Development Conference (NCDC), which is a unique, tuition-free, Junior hockey division geared toward Division I collegiate development placement and beyond, and our Premier and Elite Divisions.