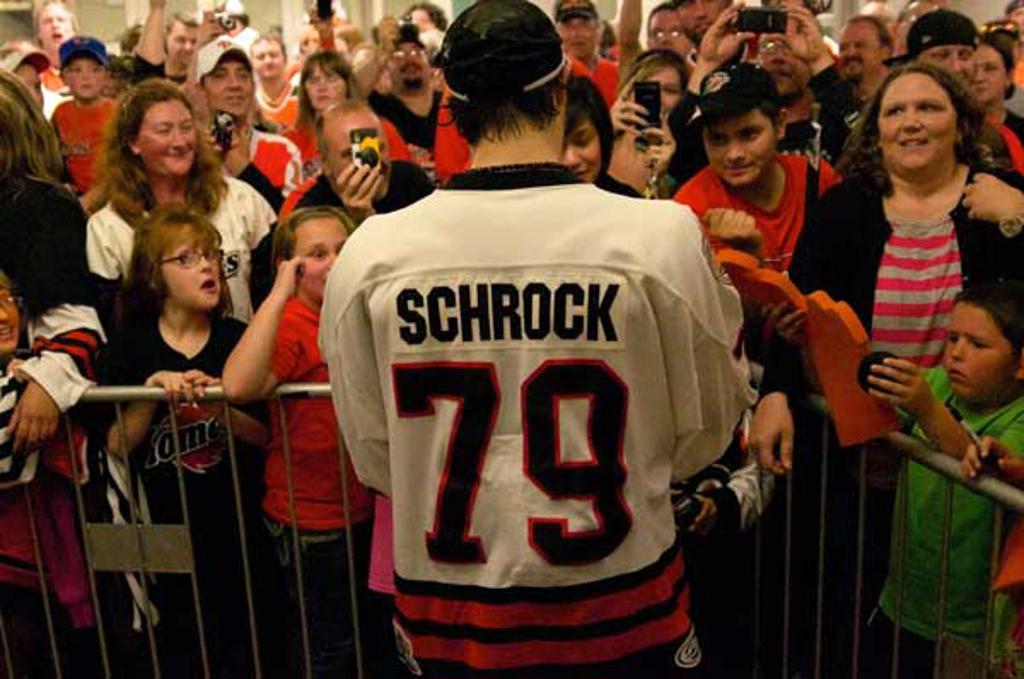 Kaleigh Schrock might be the biggest longshot ever to make the Fort Wayne Komets Hall of Fame. That’s kind of cool because everything he accomplished during his playing career was about overcoming incredible odds.

Video courtesy WANE Inside the Zone A Fort Wayne native, Coach Schrock played his youth and high school hockey in the city before leaving for Juniors hockey. Coach Kaleigh then captained the Neumann University program to a Division III national championship before returning to Fort Wayne as a part of the ECHL Fort Wayne Komets.

Coach Kaleigh played 439 games over six seasons for the Komets, collecting 81 goals, 152 points and 854 penalty minutes. Regarded as a speedy, tenacious forward and something of an underdog, Schrock was named the Komets Rookie of the Year for the 2009-2010 season, and was part of that seasons International Hockey League championship winning team. Schrock was also a member of the Central Hockey League championship winning team in the 2011-2012 season. Schrock captained the Komets from late 2013 until his retirement in 2015.

After his professional playing career, Coach Schrock stayed in Fort Wayne to oversee youth programs at the SportONE/Parkview Icehouse as well as at the Trine University rink, where he was also the assistant arena manager.  Coach Kaleigh also found the time to coach the Summit City Panthers to an Indiana state high school championship.

“It’s been (beneficial) just having the experience of developing an entire youth program, and going back and literally teaching kids who are 6 years old how to skate, and going back and redefining the fundamentals,” Schrock said. “And I’ve had just the itch to stay competitive as well. Helping the kids skate at a higher level is something I’m passionate about.”

Schrock was the logical choice to become the first Head Coach of the Spacemen, viewing the program as "... a trampoline to get kids to the next step. Having experienced that myself, it will help me establish rapport with some of those kids in that situation.”

The Fort Wayne Komets will induct Coach Schrock into the Komets' Hall of Fame on March 7, 2020.

Born and raised in Johnstown, PA, Ragno finished out his playing career at Kent State University before getting into coaching.

Ragno spent time with the FHL’s Mentor Ice Breakers before relocating to Fort Wayne, Indiana this season. This will be his third season with Culver Academies as goaltending coach, and he will also be joining Indiana Tech and Trine University Men’s and Women’s teams as Goaltending Coach. Ragno also serves as Goaltending Director for FWAHA.

Ragno operates ETM Goaltending working with clients from beginner to professional. During the summer, he oversees showcase teams as part of Stellabotte Summer Development.

Players under Ragno’s tutelage have gone on to play at almost all levels including International Junior, NCAA Division I, NCAA Division III, and minor professional (Europe, FHL, SPHL, ECHL). Growing up and playing his youth hockey in Fort Wayne, Indiana, Josh Moles went on to play four years for Culver Military Academy Prep team. After Culver, Josh played one year of Junior A hockey splitting time between the Bismarck Bobcats (NAHL) and the Seguin Bruins (OPJHL) before moving on and playing NCAA DIII ECAC-NE Hockey for Nichols College located in Dudley, Massachusetts.

After a short stint playing for the Dayton Demonz (FHL), Josh joined Next Level Hockey as the Director of Hockey Operations located in Sterling, Virginia where he was responsible for Player Development as well as Daily Operations for the organization.

Coach Moles brings a wealth of experience working with top tier AAA programs as well as helping players advance to the next level with former players currently playing in the USHL, NAHL, and committing NCAA DI and DIII. A Fort Wayne native, Coach Salway began his skating career at 3 years old as a competitive figure skater. Salway earned the right to compete on behalf of the United States for the first time at 12 years old as a singles competitor, and again between 2004-2007, where he was named to Team USA.

Over 23 years of competitive skating, Coach Salway is a national and international medalist in both singles and pairs disciplines and is a Senior (Gold) level test in three disciplines.

Salway started coaching in 2001 while still competing, but after retiring from competitive figure skating he found a niche in teaching skating skills and edges to hockey players.

Over 19 years of coaching, Coach Salway has had the opportunity to work with developing players and teams at all levels, from their first steps on the ice through professionals.

Salway has a unique ability to develop a skaters balance, awareness of their edges, and overall movement. Salway believes in the power of a process and building good habits from a strong foundation.

Justin comes to the Spacemen after a playing career that spanned across 15 seasons. As a native of Brampton, Ontario, Justin grew up playing in the Greater Toronto Area and went on to play four seasons in the OHL for the Erie Otters.

After four successful seasons in Erie, Justin made his move to the professional ranks. His first few years were split between Fort Wayne (IHL) , Toledo (ECHL) and Toronto (AHL). In this span, Justin enjoyed success at every level, including 3 Turner Cup Championships with the Fort Wayne Komets and a playoff MVP in his rookie season at age 19.

Justin then went on to play in multiple leagues throughout Europe, capturing a silver medal in Finland's top league, and landing himself a 2 year contract in the world renowned KHL. After 2 seasons in the KHL, Justin earned himself his first NHL contract with the Arizona Coyotes, and with a very strong training camp, he was named on their 23 man season opening roster. He would go on to play 5 games, scoring a goal in his first game.

The second half of his career was split between the ECHL and many of the top European leagues. After retiring in May of 2022, Justin is now shifting his focus to improving the level of hockey, across all age groups, in his adopted home of, Fort Wayne.